7 Toilets From Around the World

While many resorts and hotels across the globe cater to American and European lifestyles, including the toilets installed in their bathrooms, toilets around the globe are a different story. Different toilets function differently and so does the use of toilet paper. While every person has the need to go, we’re guessing you don’t spend hours wondering how international toilets operate like plumbing professionals do. Maybe the thought has crossed your mind, and if it has, we have some facts about toilets from different countries around the world. 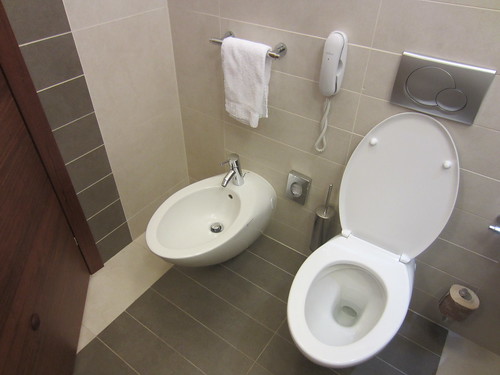 Western Europe uses porcelain toilets that look much like those in America. While you’re likely to find toilets that are much older or those that have a pull cord instead of a handle, you won’t find anything too out of the ordinary. One small difference is that toilet paper belongs in the trash, not in the toilet. Paying a small fee to use public restrooms is another difference; however, these funds are allocated to the upkeep of the facility. Often you will find an addition to the bathroom that you don’t normally see in the United States: the bidet.

Invented in France in the 1600s, the bidet is a common plumbing fixture you’ll find across Europe, but especially in Italy, Spain, and France. A bidet appears similar to a porcelain toilet, with a basin, but it includes a spout that sprays water for cleaning up. This device is considered less wasteful, eliminating the need for toilet paper, and more sanitary, since water cleans better than dry paper.

In Japan, you’ll find two styles of toilets. The first is a bidet-style toilet, similar to a toilet that you’d find in the United States and Europe. This bidet-style toilet is often called a “washlet,” and it can be simple or have fancy upgrades such as seat warming and deodorization. Those who can afford one may have a smart toilet with a panel of buttons on the wall that control functions such as playing music to cover embarrassing noises, regulating water temperature and pressure, adjusting water spout positions, and air drying.

The world’s most expensive toilet is the Toto high-end washlet in Japan, which goes for a mere $11,000.

The second type of toilet you’ll find in Japan is the squat-type toilet, which is commonly used in public bathrooms. Before the 19th century, when throne-like toilets became popular, many toilets were simply holes in the ground. Squat toilets can have some variations, but they’re essentially a hole in the ground with a comfortable place for your feet on either side.

Sometimes squat toilets are made of porcelain or metal. Some of these toilet types have the ability to flush. Others come with a bucket of water and a container for cleaning up. You’ll find a variety of styles depending on the region.

In China, you’ll find Western-style toilets in big cities and popular tourist areas, but most of the time, you’ll see squat toilets. Many people believe that squatting has health benefits. The squatting position helps with digestion and pelvic muscle maintenance. In China, you’ll find the private cubicles you’re accustomed to seeing in larger cities, but more rural areas are less concerned about privacy. Some public bathrooms will have an attendant who charges for toilet paper and for use of the facilities. Many people bring their own toilet paper, which belongs in the trash, not in the toilet.

In many sub-Saharan places, you won’t find a proper toilet given the rural circumstances. The use of outhouses, or holes in the ground, often leads to sanitation issues. Much of urban Africa uses simple squat toilets similar to those you would find in Asian countries. In Northern Africa, you’ll likely find the Western-style sit-down toilets you’re used to seeing. Of course, the more tourist-oriented an area is, the better your chances of finding an American-style toilet.

All across the world, people are making efforts to create more efficient and eco-friendly versions of toilets. You may encounter some of these inventive toilet designs in different countries or in the United States. Water-efficient toilets are designed to use as little water as possible and are becoming more common in the United States in an effort to save water.

Composting toilets use nature’s decomposition process to break down waste into nutrient-rich soil, require little or no water, and operate on batteries. Incinerating toilets use electric heat to turn waste into ash and require no water at all. However, you need to empty the ashtray occasionally.

While everyone has a universal need to use the toilet, the types of toilets used around the world aren’t necessarily universal. Each country has its own unique customs, hygiene guidelines, and plumbing systems. While the shape and function of all these different toilets may vary, the result is still the same. Whether you’re curious about international toilets or planning to travel around the world, we hope that you have learned something about how people use different types of toilets.

So there you have it. We’ve explained seven toilets from around the world: the traditional porcelain, the bidet, the smart toilet, the squat toilet, the water-saving toilet, the compost toilet, and the incinerating toilet. We believe that we have explained them all, but if we forgot to mention another type of unique toilet, please let us know. Tell us about a toilet you’ve discovered; we’ll be sure to add it to our list.

« Looking for a Reason to Remodel?: The Top 5 Benefits of Bathroom Remodeling
Sump Pump Discharge Ideas »