How Long Do Sump Pumps Last?

Sump pumps are important for redirecting the water that gets into your basement or crawlspace away from your property to prevent flooding, water damage, and other problems. To ensure your home is safe, you need to replace this sump pump every few years. If you’re not sure when yours was installed or whether its time for a new one, this article will go over the nine key signs it’s time for a replacement sump pump.

On average, a sump pump can last about 10 years. However, this depends on how much work it has to do. If you live in an especially damp climate, your home lies in a valley or depression where water and moisture tend to pool, or it was installed poorly, your sump pump may need to be replaced a little more often.

The more often your sump pump is used, the more often it needs to be replaced. Because of this variability, it’s better to time your replacement based on specific signs of a problem. In the next section, we’ll talk about some common signs that it’s time to replace your sump pump.

9 Signs Your Sump Pump Needs to Be Replaced 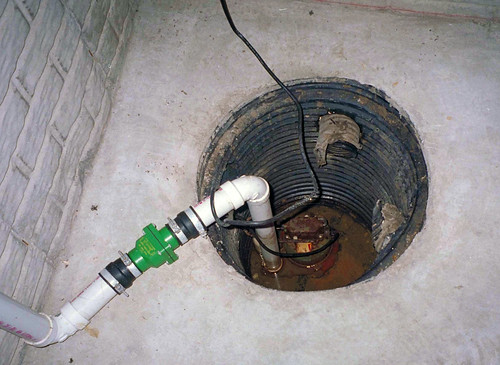 There are many ways to spot a sump pump that is past its prime and needing replacement. For optimal safety and to save money on expensive water damage, you should check your sump pump at least once a year, preferably a month or so before your rainiest season. When you check on it, look for the following nine signs of damage and old age:

Any out-of-the-ordinary noises coming from your pump are most likely a sign that one or more parts are damaged or worn out. Rattling or grinding sounds, for example, probably mean you’ve got a damaged or jammed impeller, which is the fan at the bottom of your sump pump that pulls the water down. A loud motor probably means there’s a failed bearing. Whatever the strange noise is, it’s likely time to get a new one.

If your pump vibrates a lot when it runs, it might mean that the impeller’s blades are bent or damaged due to sucking up hard debris. This bending can cause the whole thing to wobble, and this wobbling creates that vibration. While it may be possible to straighten out some slight bends in the impeller, you are probably better off just getting a new sump pump.

Every pump contains a switch that is operated by a float arm. As the name implies, the float arm floats on the water, and when the water reaches a certain level, the arm will flip the switch on, starting the pump.

If there is a problem with either the float arm or the switch itself, this process can be interrupted. One of the most common symptoms of this problem is continuous running. If the pump does not turn off, there is probably an issue with one of these two parts.

Another common problem is irregular cycling, where the pump seems to turn off even when there’s still a lot of water to pump, or it turns on even when there isn’t enough water to justify pumping yet.

Both of these problems could also be caused by wiring malfunctions, most often after a power outage (see below). No matter what the cause, you should replace the sump pump if you’re experiencing these problems.

If your sump pump takes a long time to pump out water, you might not have enough horsepower for either the volume of water it needs to pump or the complexity of the pipe layout it needs to pump that water through. For high volumes or pipes with lots of elbows or vertical fixtures, you need a sump pump with more horsepower to move the water through those pipes efficiently.

Even if your pump is relatively new, if you’re experiencing excessively long run times, it’s not powerful enough. You should get a new one that’s strong enough to handle the job.

Signs of rust mean your sump pump is on its way out. Whether it’s actual rust or a red-tinted bacteria known as “iron bacteria,” the rust-like substance will gradually start clogging the pipes so that your pump has to work harder to push water through and, eventually, will no longer be able to get enough water through anymore. This is the cause for an immediate replacement pump.

6. The Motor Keeps Getting Stuck

This is most common in pumps that have to deal with a lot of sediment or other tough material. If you notice that your motor keeps abruptly stopping, it might be impacted by this material. If you don’t have this problem right now but you know your pump will need to deal with excess sediment, you can buy a filter now to help extend its life.

However, you will still need to clean out this filter every six months to a year and replace it every couple of years in order to keep your sump pump functioning well.

One of the biggest problems and most obvious signs that you need a new sump pump is when the motor stops working. Before you write it off as beyond repair, however, make sure to double-check that it is not a problem somewhere else. For example, the pump has become unplugged or simply blown a fuse. So check the plug and your fuse box if your motor isn’t working. If neither of those was the issue, then you need a new sump pump.

For a sump pump to be running effectively, the arm and switch mechanism works properly. The float inside helps control the switch.

If it’s constantly running, it could easily wear down the engine and cause quite the annoyance. A constantly running pump also may mean it’s not able to control the amount of water it’s receiving. Look into replacing it.

Power outages in your home can cause damage to your pump’s electrical system. Even if you have backup power set up, this will not undo the damage caused to your sump pump. So, if you’ve recently experienced a power outage, run a quick test of your sump pump to see if it was damaged in the process.

With spring just around the corner, heavy rains are on their way. This is the ideal time to check on your sump pump and look for the signs you read about above. Head down to your basement and check for the signs that it’s time to get a new sump pump!

Photo Credit: Image via Flickr by State Farm CC by 2.0

« Sump Pump Discharge Ideas
Remodeling Your Kitchen? Check Out These Must Have Kitchen Faucets & Accessories »